skip to main | skip to sidebar

do cease to be silly if they are done by sensible people in an impudent way." ~Jane Austen

Well, here are my 5 examples of "mise-en-scène" (which is basically how a scene is set up for a shot: the placement of characters, props, composition, etc.) for Foundations I suppose :o Also, key aspects of mise-en-scène are: decor, lighting, space, costume, and acting.

This is a mise-en-scène appears during the credits of the movie. The two main characters Black and White are brothers set in a place called Treasure Town filled with yakuza, aliens, and change. They are called Cats because they're 'strays' and together they 'rule the town.' During the middle of the movie White decides to plant a seed from an apple he was eating. After that the theme of the apple tree growing continues to pop up throughout the movie but it hasn't grown even though they water it everyday.
The scene above shows where White and Black lived (which is the car- also the number 96 and 6 in general appeared a lot in the movie) but now that the brothers have left the town, I think it shows that they will grow with each other in their new environment.
I like how you can see the factory lines and pipes in the background (growth and development with machinery also played a role in the movie)with the curved overpass framing it in a way that the viewers eye is drawn to the apple sign which then gets your attention to the pile of whitish dirt with the apple tree beginning to grow in faint rays of light.
At the beginning of the credits you just see the apple sign and then the more credits that go by the more the seed grows.
below is where I got the photo..
Tekkon Kinkreet 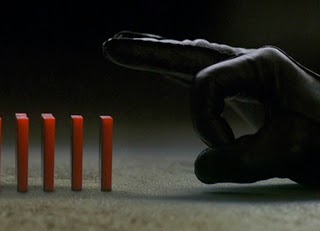 V for Vendetta- Domino Scene
For this mise-en-scène it primarily has to do with the dominoes falling. When you watch it from the side it's like an ocean wave, if it wasn't interrupted by riot scenes and the angle of the shots weren't shifted it would almost be a one shot aha. After the 00:38 mark it is one scene when V lifts the one domino that hasn't fallen. The lighting is well lit for the scene considering how this movie is mostly dark and with V's gloved hand coming down to pick it up ever so thoughtfully the music that was so dramatic and rising to the climax before turns to a tender side when V picks up the domino piece.
photo from..
Mystery Man on Film- V for Vendetta


Arsenic and Old Lace
This movie is just amazing. I love it, so funny. It doesn't hurt that in my first play I was really in I played Aunt Martha ahaha. Anyways, this movie- if you haven't watched it you really should, is a hoot. There is a lot of physical humor and verbal irony in this movie and I'm not sure if I know the definition of mise-en-scène to rightly say if something is or isn't it, but I think the below link would be an example of a one shot scene with cousin Teddy charging up the stairs- which he does several times throughout the film. The element of watching Teddy run up the stairs and slamming the door so hard that the picture next to it swings up a bit from the force would be an example of decor being effected by the character.
Chaaaarge!!!
Below is also a scene when Mortimer figures out who Jonathan is and I think the scene after Mortimer says "holy mackeral" had some laughs. With the scene you have the aunts who play a large role along with Mortimer's fiance' in the background, you also have Jonathan in the foreground taking up part of the left side of the screen. Then when Mortimer gets a bit gutsy before his "hollywood" line he seems to tuck his jacket back in a bit as if to give himself a confidence boost.
Arsenic and Old Lace scene
With the above picture as well I feel like it's a good frame because it shows the aunts waiting with baited breath to see if he'll drink their 'elderberry wine.' In the right corner you also see some drinking flasks  and such. The lighting almost halos the two aunts.
photo from...
Doctor Macro high quality movie scans
You can find the movie on youtube aha. 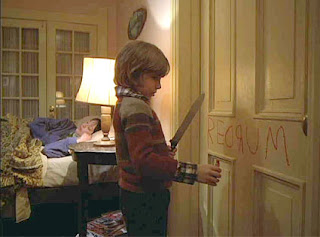 Ahhh, ok well I don't watch horror movies but at Oxbow last year we watched this up in the library for Halloween and I seemed to have remembered some long shots off of this film. Also, this film seems more like a horrible brain trip than a horror ahhh...just watching these clips get me all intense and freaked out aha.
Redrum scene
All the way up to the 1:32 mark, if I'm not mistaken, is one complete shot. It's eerie enough that the kid, Danny, is speaking in his scratchy "Tony" voice, but as he walks across the room towards his sleeping mother and grabs knife off of the table top with accompanying dramatic chords it just is freaky. The lighing is low with only two lamps in the room and some overhead lighting as well and it ads a freaky homey feeling that is all twisted in this situation. With his mother asleep during this whole scene and shifting every once in awhile along with some magazines and other normal items placed throughout the room this scene would be perfectly normal, but no, we have a creepy kid saying 'redrum' over and over again with a knife. So, there we go.
I was also considering the hallway scene with the twins...
The Shining- Hallway scene
It shows Danny cycling down corridors with the camera following behind at a good distance. The camera continues to go down the corridor for a few seconds even though Danny has cycled off of the scene....
picture from...
Greenlighthalo
I know we're supposed to give 5 examples but I feel that with my other examples within one example will be good enough eh? D: hopefully...?
If not I can always come back and add another one...


Here is a swell youtube video that a music buddy of mine told me to look up...
Axis of Awesome - 4 Chord Song
Also, here's a neat site my friend posted on her facebook
TodayAndTomorrow
Later!
~Alex
Posted by Arkeyana at 4:19 PM